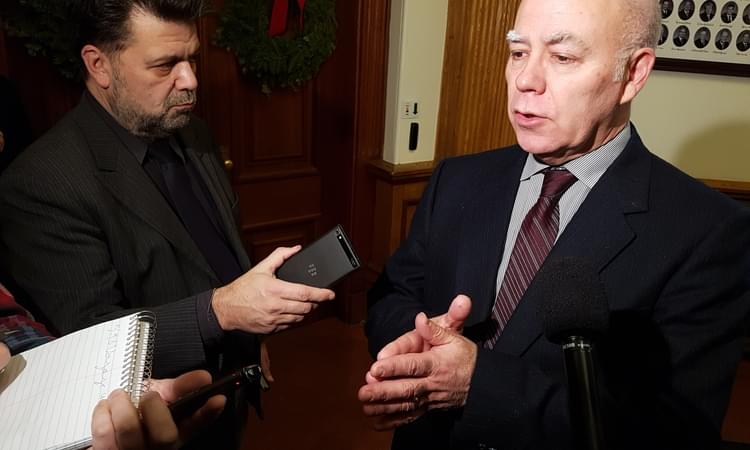 FREDERICTON • David Coon says New Brunswickers should buy from their own.

The Green leader has been giving stump speeches in the lead up to September’s election citing the importance of self-resilience, hoping to add to his party’s one seat in the legislature.

“We need to think local and grow local,” he said at a recent speech to the Fredericton Chamber of Commerce as part of its political leaders’ series. “We already see an appetite among young entrepreneurs various parts of New Brunswick to provide products and services regarding energy efficiency, energy storage, renewable energy, local food, and bio-based substitutes for fossil-based materials.”

He said growth in these areas would replace imports and retain money locally, rather than seeing it spent out of province.

To accomplish this, Coon has long held New Brunswick needs to transition to his favourite colour. To reduce greenhouse gases and fulfil the province’s commitments in the Paris Accord, he favours establishing targets for refurbishing homes and commercial buildings to be energy efficient.

Given the old age of most New Brunswick buildings – 85 per cent of which are considered energy inefficient – Coon said such a program “would create years of work for contractors and trades people,” with savings coming back to local economies.

The Green Party would also amend the province’s Electricity Act to set targets for the production of locally produced renewable power and energy storage systems, beyond the small gains already realized.

As part of an overall “buy local, grow local” strategy, his party wants to put in place financial incentives that would curb the number of imports New Brunswickers buy. These could take the form of targeted loan guarantees for small enterprise and payroll rebates for the first-year of a start-up’s operation or the expansion of existing small enterprises, he says.

Coon wants the province’s forestry policies to change drastically, arguing they have too long favoured corporate interests over local communities. Unlike the governing Liberals or opposition Tories, parties that have long held the view that big forestry companies must remain internationally competitive to ensure the vitality of sawmill communities, the Green leader wants to see big changes, starting with a totally revamped Crown Lands and Forestry Act.

The legislation hasn’t been modernized in some 40 years.

The leader surprised many in the last election of 2014, winning the Greens’ first seat, in Fredericton South, and his party winning about seven per cent of the popular vote.

Coon is hoping some of the exposure he has received as an MLA over the last four years – and his outspoken views against the orthodoxy of New Brunswick’s traditional governing parties – will build on those gains.